Think outside the (shoe) box

Think outside the (shoe) box 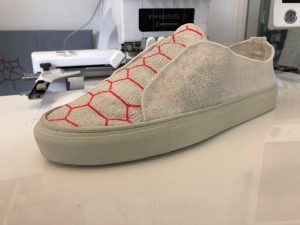 Sneakerhead (noun): a person who collects, trades, or admires sneakers as a hobby. A sneakerhead may also be highly experienced in distinguishing between real and replica sneakers. Sneaker collecting is a hobby often manifested by the use and collection of shoes made for particular sports, particularly basketball and skateboarding. Wikipedia

This "make your own shoe" concept may be the equivalent to a fantasy football league for the sneaker-obsessed. I saw this company on Kickstarter back when they first launched. I happen to have a kid that was a sneakerhead at that time (hi Ty!). He was not only into collecting shoes, he was into designing and drawing them. I purchased a kit for him and our daughter (hi Liv!) for Christmas that year, thinking that being able to make his shoe designs might appeal to him.

Admittedly, his intense interest in sneakers waned, and I do not think he ever actually made the shoes, but I still LOVE the idea of being able to make something completely custom in footwear.

I recently heard from one of the cofounders of the ONEDAY Sneaker Kit, Troy Nachtigall, who is working on his PhD thesis in shoe design and making. In the conversation, Nachtigall mentioned that they, "Have spent a lot of time programming our digital embroidery machine to make shoe uppers" and he sent me photos. 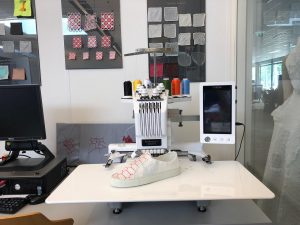 Not surprisingly, I responded and said please tell me more!

Nachtigall encouraged me to share the project, which was done with Lucia van den Hoven in the Wearable Senses Lab at Eindhoven University of Technology in the Netherlands. It’s an Open Source, Open Culture Project. Anyone can make their own brand with it.

He went on to say, "We used the Solvy Embroidery film to make this pair so it breathes well, but I have students who have embroidered felt, thin EVA foam and quilting batting to make all kinds of great shoe uppers."

My brain is spinning with all the possibilities of what I could put on a pair of custom embroidered shoes that I can design, build and wear from scratch! Floral designs, monograms, cute animals, groovy graphics, photos (hello transfers and sublimation), engraved designs - did I mention that my brain is spinning?

What would you put on a pair of ONEDAY sneaks? Post your ideas in the comments below!