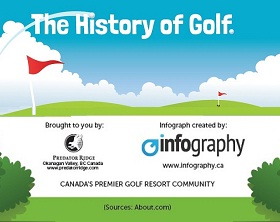 I have often wondered just how many golf shirts are embroidered or decorated with logos each year.  The collective number HAS to be staggering, don't you think?  So that got me to thinking about the history of golf, and wondering when sponsor logos started appearing in the golf industry - on products and on apparel. I have not found the answer, yet, of the first occurrence.

I did find this reference to when logos started appearing on golf headwear on the Imperial website:

By the 1950s, Imperial became one of the first headwear manufacturers to cater to the growing golf industry. The decoration of headwear with customer logos became popular in the 1950s with simple logo patches sewn onto caps. Imperial was the first company in the golf industry to develop expertise in using direct embroidery.

I learned that the first recorded hole-in-one happened in 1868.  And that in 1971, astronaut Alan Shepard hit a 6 iron off the moon!  And golf carts entered the scene in 1932, but took a while to catch on.  And a dentist is credited with inventing the modern wooden golf tee.  Betcha' did not know that either!  I certainly did not.

In the meantime, here is a cool, funky look at the history of golf, according to the fine folks at Predator Ridge in British Columbia, Canada - a course my husband aspires to play some day.

How many golf shirts do you think you embroider or logo a year?  Post your "guestimate" below!